DANNY GUINAN – NOW IS THE TIME

Songs for a new era

Now is the time, the new album by Irish singer-songwriter Danny Guinan, may well be the perfect soundtrack for the world as it emerges from the coronavirus crisis. Addressing the universal themes of hope and fear, love and loss, and courage and humility, his songs reveal the prospect of a new beginning with the healing of old wounds and the promise of a better future.

After moving to the Netherlands from his native Ireland, Guinan embarked on a relentless touring schedule that saw him build up a loyal fanbase on the European mainland. These years on the road were followed by a period of reflection in which he took the time to regroup and refocus. That process inspired him to write and carefully craft his most recent collection of songs and to tell a tale that is underpinned by an urge to break with the old and embrace the new.

Danny Guinan recorded his new album at the sublime Exalto Studios in Haarlem (NL) where a stellar cast of musicians, including Ed Veltrop (piano), Ray-Edgar Duyns (bass), Leon Klaasse (drums) and Glenn Schwarzer (guitar) teamed up with co-producer Bart Wagemakers to endow Guinan’s songs with the perfect feel. The string arrangements, written by Wagemakers and performed by The Magic Strings, provide the glorious finishing touch.

Now is the time. For reflection. For vision. For new beginnings. Time to look up and rediscover the stars. Time to stop and listen to tales that are as inspirational and uplifting as they are honest and humble. Or as Guinan sings in the first line of the opening track: Now is the time to start out again.

As a songwriter, Danny Guinan draws comparison with artists like Damien Rice and Glen Hansard, although his Irish roots are unmistakable in his music as well. In the past, he has toured with the likes of Luka Bloom and Shane McGowan but has more recently developed into a songwriter whose artistic voice no longer sings exclusively to the tune of his origins.

Guinan is a singer-songwriter with a long record of service. After fronting the successful band Speranza in Ireland, he moved to the Netherlands to pursue a solo career. Several albums later, and having toured extensively in Europe, the USA, and Asia, Guinan stepped out of the limelight to concentrate on writing and producing his next album. 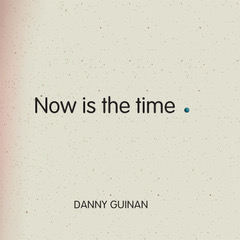