KAFKA – OUT OF TUNE

Black On The Canvas quote: “Kafka brings the listener to a simple paradise, somewhere far removed from the bustle and stress of everyday life, where everything flows and is at peace. Dafne Holtland’s sweet, airy vocals float above the tropical percussion and blend seamlessly with the subtle harmony from the other half of Kafka.”

OUT OF TUNE – KAFKA
We are ‘out of tune’. Out of tune with ourselves, with each other, and with nature.

In music, when you play or sing out of tune, the only thing you have to do is listen. Listen and bend towards each other. That’s what Kafka (Frank van Kasteren and Dafne Holtland) did on their debut album.
The musical confluence of two people from two completely different musical backgrounds bending towards each other and completing each other perfectly. Out of tune is a critical sketch of life in this day and age: cheerful and thoughtful. One moment, bombastically melodic, then layered, quiet, and modest. Exciting in a Kafka-esque way, followed by the harmonic conclusions you were hoping for. With a lazy, raw undertone – rhythmic, digging, and exciting.

On Out of Tune, Kafka tells about lovers that never had the courage to confess their feelings and missed their shot at love. They sing about being out of tune with life and yourself after losing someone you love when everything around you doesn’t match the way you feel. About our constant desire for short-term happiness to distract us from the speed and pressure of day-to-day life. The title song Out of Tune draws the bigger picture of us being out of tune with nature and life around us.

In between Kafka brings hope and light.

‘We think music is the best way to get closer and deal with anger, grief, and loss. The moment music sounds and feels exactly like you feel, it is like someone completely understands you. It’s love. You just have to listen.’

Mp3 Hugger USA quote: “This is the kind of close-quarters that music used to offer us and Kafka appears to be determined to give us back. The kind that might have us hugging the subwoofers like the old days, cute as pie then and with plenty undercurrents that this ain’t going to be a happy ever after. Kafka messes with our heads, but all in a twinkle in the sky manner so we won’t hold grudges. Yep, this is something to stir us into action on their behalf, a voice from the heavens deserves at least that much.” 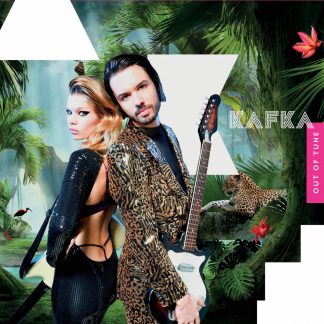